Agriculture students from both Bear River and Nevada Union High School traveled to Fresno this past week to compete in the state finals speaking contest and attend the annual State FFA Convention. Bear River High School’s Emma Rose Jones brought back the gold winning the 2015 California FFA Prepared Public Speaking Career Development Event. The Prepared Public Speaking Career Development Event was created to foster and develop the speaking abilities of FFA members, as well as develop their self-confidence and contribute to their advancement in inter-personal skill attainment and leadership development. Students choose a topic, write, memorize and present a 6-8 minute speech. To get to the state competition, Emma had to win the sectional contest, the regional contest and beat the top twenty-four students from around the state at finals. Emma will now compete for the national title in October, in Louisville, Kentucky at the National FFA Convention. Emma gave a lot of credit to her support structure to help her win; “I am beyond excited, the hard work paid off! I am so lucky to have had such incredible support from my family, Chapter members and coaching from my advisor! This is BRHS FFA’s 28th state title under ag teacher Steve Paasch’s leadership. He’s a living legend in agriculture education; I’m lucky to call him my friend and mentor, and BRHS FFA is lucky to have him!”

Following the conclusion of the state speaking finals, Nevada Joint Union High School district enjoyed a successful four days at the 2015 California FFA State Convention. Bear River brought Twenty-eight students, and Nevada Union FFA brought Thirty-four to compete in contests and expand their agricultural and leadership knowledge.  The California FFA Convention is held each April with over 5,000 FFA members and guests from across California in attendance. At the California FFA State Leadership Conference, members participate in general sessions, educational leadership workshops, a career show, and engage in delegate sessions to accomplish the business of our association. Students were entertained by Nevada Union’s State FFA talent Tyler Warner and Amanda Perry while Nevada Union’s Taylor Foster, Maxie Holmberg-Douglas and Heath Mullen took on the additional challenge of running for State FFA Office. After days of grueling interviews Maxie was slated for president and Taylor was slated for Vice-President. Additionally, Nevada Union graduate Ellen Van Noy concluded her year as a State FFA Officer by delivering her retiring speech to over 6,000 high school students addressing issues ranging from the negative effects of bulling to the importance of getting involved in extracurricular activities. 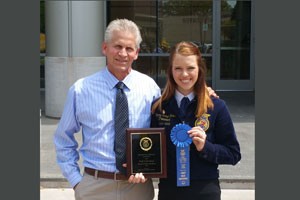