A local transient led sheriff’s deputies on a high speed pursuit. Nevada County Sheriff Keith Royal says a Deputy saw a dark colored Mitsubishi traveling on Rough and Ready Road early Sunday morning. When the deputy tried to stop the car to talk with the driver, the driver fled. The Sheriff says the driver reached speeds of 85 miles an hour on the Old Rough 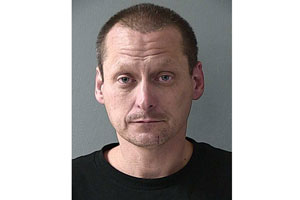 and Ready Highway. The Grass Valley Police were alerted and deployed a spike strip on West Main Street. The driver 45 year old Darrel Skelton ran over the strip and flattened all four tires. The Sheriff says Deputies order Skelton out of the car and broke the drivers window.
Click here to listen to Sheriff Keith Royal

A quantity of marijuana and suspected meth amphetamine were found. In addition to the drug charges Skelton in facing a warrant  for his arrest from Yuba county was found. The warrant was for evading law enforcement and violation of probation.