Hit and Run Driver Convinced to Turn Himself In

A hit and run driver ends up turning himself in after fleeing the scene following the accident. Grass Valley Police Sgt Clint Bates says a collision was reported around midnight in the 100 block of East Empire St. 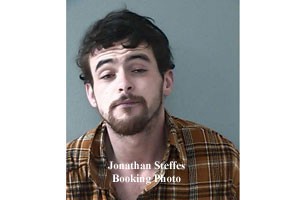 Several of the canisters had been used. The effect is similar to what is experienced during dentistry work.
Additional witnesses were also questioned. After several hours the suspect, 23 year old Jonathan Steffes turned himself in.

Steffes was arrested and charged with hit and run causing bodily injury. Bates says additional charges for possession of the inhalants, and child endangerment because the passenger was under 18 are being reviewed by the District Attorney’s office.