Two Accidents on HWY 20 Over Weekend

Two solo vehicle accidents were reported on Hwy 20 over the weekend that sent people to the hospital.  First on Saturday,   a 1994  Jeep Cherokee  plunged down a 30 foot embankment off Highway 20 west of Whitecloud around   6 o’clock in the evening.  Nevada County Consolidated Battalion Chief jerry Funk says first reports indicated the vehiclewas on fire and  had overturned on its top with possible victims trapped inside.
click to hear Jerry Funk 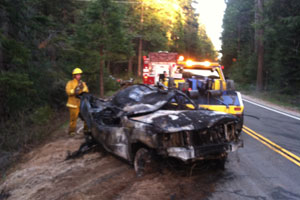 The vehicle  and surrounding wildland fire was  contained to less than one quarter of an acre shortly after firefighters arrived.  The 3 victims sustained minor to moderate injuries and were transported to Sierra Nevada Memorial Hospital for treatment.  The 21 year old driver from Nevada City  told the officer he had diverted his eyes to look at his I-Pod when he ran off the road.

Then on Sunday an elderly couple from Clear Lake were traveling westbound on Highway 20 just west of  Bear Valley when  their  2012 Ford Escape drifted onto the shoulder then overturned. The 84 year old Driver and his 80 year old wife both sustained moderate to major injuries and were flown to Sutter Roseville Trauma Center by helicopter.  Officials say there were indications the man might have fallen asleep at the wheel.