An intoxicated male that was being taken into custody ended up with a head would when he fell to the ground Sunday. Suspect Steven Ward, 59, was originally being questioned for assaulting a victim while being under the influence. Sheriff Captain Jeff Pettitt says the suspect had walked up to the victim and punched him and pulled his hair. When deputies responded they located Ward in the back of a nearby trailer in which he didn’t have permission to be in. Deputies recognizing the smell of alcohol on the suspect as well as slurred speech informed Ward that he was going to be placed under arrest. While sitting in a chair with one handcuff on, the suspect decided he wasn’t going to cooperate. 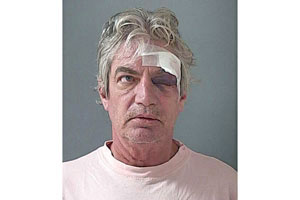 The suspect was transported to the hospital to be checked at which point he continued to be violent.

Steven Ward was eventually booked into the Wayne Brown Correctional Facility for drunk in public, resisting arrest, and battery.