Intoxicated Transient In The Company Of A Minor Arrested for Burglary

A suspicious male subject loitering around the alcohol aisle at the Sutton Way Safeway drew additional attention from a store employee when he hurriedly headed for the door hunched over with an obvious bulge in his jacket. The employee contacted Grass Valley Police who were close by and they caught up with the man as he was attempting to get in his parked vehicle. The man was identified as 21 year old Shawn Birk a known transient in the Grass Valley area.
Click here to listen to Sgt. Steve Johnson 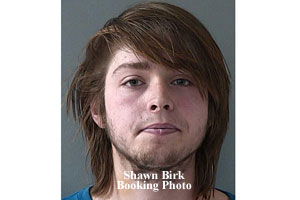 It was also discovered that Birk had been in the adjacent CVS store before going into Safeway. Video surveillance shows Birk stealing cigarette lighters from the CVS store.
Though officers suspected that Birk was intoxicated when he drove to the Safeway parking lot, no witnesses could confirm seeing him drive. However there was someone else waiting in the vehicle.
Click here to listen to Sgt. Steve Johnson

Shawn Birk was taken into custody for second degree burglary and being intoxicated in public.