Jury Selection is underway in Nevada County Superior Court today in the case of a man accused of 2 counts of attempted murder.  26 year old Daniel Lucas Colondres  is accused of  stalking a woman and then breaking into her home in the 14-thousand block of Lake Wildwood Drive in the early morning hours of August 20th, 2011 while the woman and a male companion were sleeping. 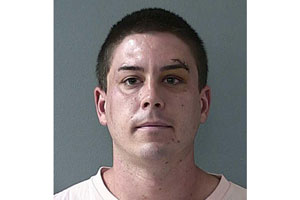 The couple awoke to find Colondres armed with a knife in the bedroom. He then  proceeded to attack the two, causing serious slashing and puncture injuries.  A neighbor overheard the commotion and tried to stop it. During the struggle, Colondres was hit on the head with a golf club, and then fled the scene. He  was later apprehended.   Nevada County Assistant District Attorney, Anna Ferguson says  the two victims are recovered and now doing well following the  attack and will be able to testify at trial.  Colondres faces  two counts of attempted murder with a special allegation of great bodily injury, first degree residential burglary,  stalking,  violation of a restraining order, and other charges. If convicted on all charges Colondres  is looking at a possible life sentence.