K-9 Rudiger is Out on Patrol

Rudiger,  the new Nevada City Police Department K-9  Officer has been  officially on the job for just about 3 weeks now.

Nevada City Police Officer Scott Goin who with Rudiger was also at the Nevada County Fairgrounds Dog Show last weekend with demonstrations of how Rudiger can catch a suspect and take him to the ground. Yet,  when Rudiger was around crowds of people he is very friendly and likes to be petted. Officer Goin says they have already been on patrol together.

Officer Goin says he has been taking Rudiger with him as he goes out on foot patrol, especially in the wooded areas where some homeless have been camping.  He says having Rudiger is just like having another officer by your side.

Rudiger is still completely community funded. He has a Facebook page where people can make donations to support the K-9. He also has some special Rudiger T-shirts for a donation of $20 that people can purchase to support his care and upkeep. 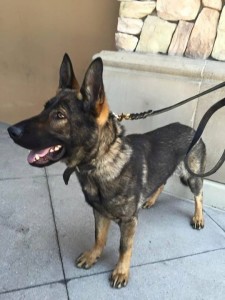