I went to see Company last weekend at the Nevada Theatre and really enjoyed it. The music and performances were great.  The era is the 70’s and the same birthday party is played out multiple times, but with different outcomes.   And the costumes, retro to the 1970’s, also gave me a few flashbacks.    If you were dating in the 70’s you will appreciate the way couples related (or didn’t) to each other back then.  In his memoir Stephen Sondheim said “Company” is about “the challenge of maintaining relationships in a society becoming increasingly depersonalized.” and that was in the 70’s.   I wonder what he would say now?

The Sierra Stages production of  COMPANY is funny and poignant  by Stephen Sondheim and George Furth closes its four weekend run on Sunday March 23. The final four performances are Thursday March 20 at 7 PM, Friday & Saturday March 21 & 22 at 8 PM and Sunday March 23 at 2 PM at the historic Nevada Theatre in Nevada City. 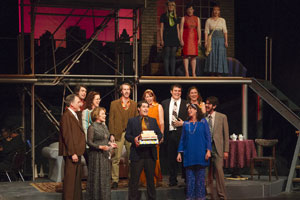