Advocates for the restoration of wild salmon have a message for Governor Jerry Brown: “Fish don’t drive, and Yuba River Salmon deserve better.”
Caleb Dardick is Executive Director of the South Yuba River Citizen’s League which is the leading voice for protection and restoration of the Yuba River watershed. He says the new initiative to save wild salmon by trucking them from the Lower Yuba River to the Upper Yuba river is a bad idea.

SYRCL is asking people attending the Wild and Scenic Film Festival and others in the community to write a letter to Governor Jerry Brown and U.S. Commerce Secretary Penny Pritzker, urging them to look for a long term sustainable plan for helping the salmon get upstream to their spawning sites . Dardick says a radical idea would be to remove dams, but dams could also be lowered to a height that a fish ladder could be put over it.

Dardick says the so called “trap and haul” plan endorsed by state and federal fish protection agencies has an estimated price tag of $700 million.
More information on SYRCL’s letter writing campaign is available at  www.fishdontdrive.org 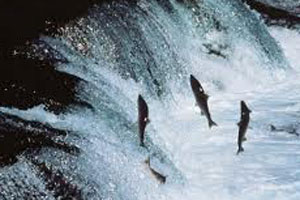