All fires remain less than an acre.  Out of the 17 total, 9 are contained or controlled. 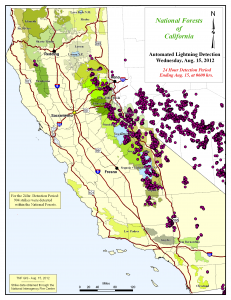 Fires in the American River District –

3 in or near the Granite Chief Wilderness – Smoke jumpers remained on scene last night working on two fires.  One fire contained.

Fires in the Sierraville District –

Fires in the Truckee District –

1 near the Cedars – about 5 miles south of Interstate 80 at Norden – 1/2 acre – Crew continuing with heavy mop-up and remained on the fire overnight.

1 north of Interstate 80 near Rainbow off ramp – controlled

Continuing thunderstorm activity is expected this afternoon and tonight and throughout the week.