The 3rd Annual Soap Box Derby to benefit Pioneer Park in Nevada City was a success. The top speed cars, reaching speeds greater than 40 miles per hour, thrilled the crowd as they raced for bragging rights. The Art Car entries entertaining the crowd with entertaining themes. All cars had a team supporting them along the course and in the “pit area”.  Kudos to Rich Bodine and Gary Apple- co-chairs of the event along with assistants  Jeff and Dave as part of their committee. 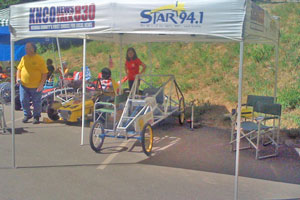 The KNCO Media Eater was a combination speed and art car and won bragging rights in the media world beating The Union and KVMR in the media race. In all fairness, KVMR entered an art car and was promoting their upcoming 35th anniversary. The Union entered a very cool looking combo speed and art car as well. The Union converted a newspaper machine for the body, and used a plastic delivery box for each fender giving it a sleek Formula One race car look. 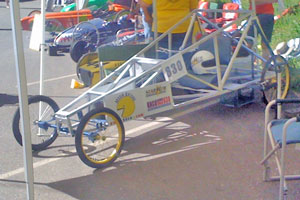 The KNCO Media Eater theme was a radio tower on its side. (It’s coincidental we have been experiencing intermittent transmitter issues- We didn’t really use our tower for the body of the vehicle.)

The Media Eater Pit Crew worked like a well oiled NASCAR team. The Crew consisted of:

Team Owner/Builder- Scott Robertson and his wife, Marketing Specialist  Deb.  Scott playing the role of the owner flawlessly- pacing the pit and course area, always looking to improve the Media Eater- checking in with his driver before each race- jumping in when extra hands were needed during a tire repair. Deb designing and creating the Media Eater logo and team shirts as well as serving as team photographer.

Head Pit Crew and Track Safety Monitor- Phil Condict- Phil assisting with set up and take down of the pit area as well as being the most entertaining bullhorn operator track-side keeping the lower track clear and making the crowd smile at the same time.

Pit Crew member- Geoff Flynn- Geoff assisting with moving the cart around the pit area with Pit management and also assisting with crowd control along with Phil.

Driver- yours truly- Ricky Bobby…basically I just sat in the vehicle, closed my eyes,  held my breath, and gripped the so-called steering and brakes while pretending to have contr0l as gravity pulled us down the course at Space Shuttle .

Driver’s Wife- Tamara- who literally saved the day when the Media Eater blew a tire at the end of the first race. Once it was apparent that we did not have a replacement tube- and none of the other teams had a spare tube or wheel the same size- drove up to the Tour of Nevada City bicycle shop and picked up two more tubes and returned in time to hand off the tubes to Scott. Scott then getting them back to the pit so we could swap out the tube, reinstall the wheel, inflate the tire, and get back in line just in time to get up the hill for the second run.

Assistant Pit Crew and Team  Promoter- Joe Hevia– Joe provided vehicle hype and book-making with competing team owners. Apparently Joe bet a rival media team. Hevia bet bragging rights,  the car, and apparently MY house against The Union for a bottle of wine. Of course he didn’t tell  me that until we were rolled into line for the first race…. I hope I get a glass of that wine

Thank you to all of the teams that participated in the Derby. Every team tried to find a tube or a wheel that would fit when we had our flat tire. It was a day of sportsmanship and camaraderie  shared by everyone.