Starting the process as one of 22,000 applicants, a south county young man is one of 47  graduates celebrating completion of the California Highway Patrol Academy. Cadet, Terry Baenziger, completes his 27 week training period with the Highway Patrol today, and will be moving on to Central Los Angeles Area Office for his first assignment. Baenziger says the academy experience was more than he expected and necessary to become a successful officer.
Click here to listen to Terry Baenziger 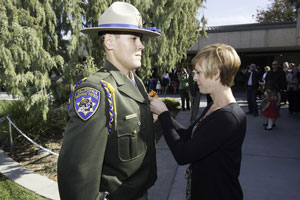 Thirty-six year old Baenziger chose the highway patrol after exploring a number of law enforcement agencies and matching his perceived skill set with the agency mission.
Click here to listen to Terry Baenziger

Baenziger was also a Company Commander for his cadet class and voted the Most Inspirational Cadet by his classmates. Photo provided by CHP Senior Photographer Joe McHugh

Terry, Uncle John and I are so proud of you. You have always been a go-getter and someone that is so interested in people and it shows. Congratulations to you too Juliette for all the much needed love and support you gave Terry while he was pursuing his dream. We know you will be an asset to whatever community you are serving. Love Uncle John and Aunt Judy.

Terry.....we are all so very, very proud of you......this has been a long road and you never gave up....you gave it your all and you came out a shining star and should be so proud of yourself......so happy your family was there for you every step of the way encouraging and supporting your dream......you are an amazing individual who seeks and accomplishes whatever task you are faced with.....CONGRATULATIONS on your new career....we love you and wish you the very, very best......you and your family are always in our daily prayers and good thoughts......ooxooxoo....