A local teen football player is catching the eye of some important people and has earned a spot on an elite team representing the United States. Thirteen year old Garrett Graves is going to Canton Ohio at the end of June to play on the 14 and under USA Football team. Graves who has played in the Junior Miner program since he was seven says he caught the eye of some scouts while he was at a skills camp in Sacramento. 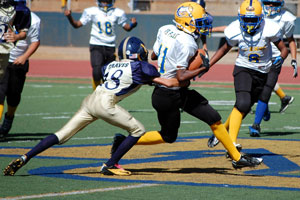 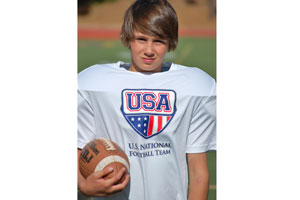 The Union Hill student says he likes the contact in football, but because of his size it can be challenging too.
Click here to listen to Garrett Graves

Garret’s mom, Tiffany, who admits isn’t a total football mom,  says the experience is a lot more serious than she thought it would be.
Click here to listen to Tiffany Graves

And then Garrett and his mom started thinking about what was really happening.
Click here to listen to Tiffany Graves

A week later, Garrett received notification that he made the team, and he’s now preparing to head to Canton at the end of June.
The team will participate in a number of games against other international youth football teams as well as a number of clinics with NFL players and coaches and a dinner at the NFL Hall of Fame.