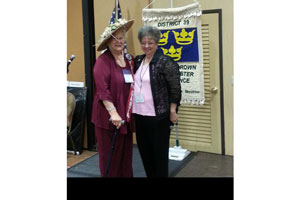 Ms. Oates is 84 years old and has been a Toastmaster for 30 years. During her 30 years Ms. Oates has served as both an Area Governor and Division Governor, always achieving Distinguished Status. She has mentored both new and seasoned members. She has attended 29 of 30 International Conventions missing only one due a foot injury.

One of Ms. Oates’ most noted accomplishments as a Toastmaster was joining with other Region 1 Toastmasters in 1989 to found a Toastmasters Club in Georgia  then part of Southern Russia. The club was dubbed the “Love Thy Neighbor” club. Because of the restrictions on sending Russian currency outside the nation to the United States to pay dues, Ms. Oates actually paid the dues for the members for several years, out of her own pocket.

Ms. Oates received a plaque that displayed not only her name, but the name of all of the previous Herb Yarbrough Award winners. At the next Spring Conference in 2014, the plaque will be passed to the next recipient and Ms. Oates will be given her own plaque to commemorate her award.

Ms. Oates was stunned and honored to receive the award. She is pictured below with District Governor  and Distinguished Toastmaster Diane Bish.