Lombardo-Barton Brought In on Probation Violation 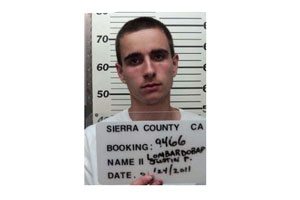 Lombardo-Barton for several months for a violation of probation. Sheriff John Evans located the suspect at a mobile home park in North San Juan, Saturday night. The capture was made after Lombardo-Barton repeatedly said he would turn himself in on the warrant for his arrest. The Suspect had been convicted of running over the Cattle dog, hitting several cows with his vehicle and threatening several cow boys,  in June of 2011. Maggie the cattle dog has made a recovery, but not recovered completely.