The two CAL FIRE personnel and one of the U.S. Forest Service firefighters
are likely to be treated and released this evening. The remaining U.S. Forest Service firefighter is being admitted with serious burn injuries.
CAL FIRE has activated one of its Serious Accident Review Teams to review the incident. The Lowell Fire has now burned 1,500 acres in the You Bet area and is 15 percent contained.
The fire continued to increase activity as the day progressed yesterday (Sunday)with terrain driven runs in the afternoon to evening. The fire has the potential to continue to move upslope until the downslope/canyon winds develop later tonight. The wind pattern combined with the lower temperatures and slight humidity recovery will keep the fire spread limited. Access to fire is very challenging, but hundreds of firefighters are actively battling the fire in the air and on the ground.

Evacuations: Mandatory Evacuations are in effect for Red Dog Rd East of Greenhorn Creek, You Bet Road East ofGreenhorn Creek, Chalk Bluff and Lowell Hill Roads.
An evacuation advisory is in place for the Cascade Shores Community.
An evacuation center has been opened at the Nevada Union High School, located at 11671 Ridge Road inGrass Valley.
Road Closures:
Soft road closures are in place at: SR‐20 at Lowell Hill, I‐80 at Dutch Flat Exit 139, I‐80 at Secret Town Exit 149, Chicago Park at Powerhouse Road, Diggins at Alta and Mando Rd. between Pasquale and Banner.

Due to the Lowell Fire, currently burning in Nevada and Placer counties, Cal Fire and assisting agencies have set up a command post and fire camp at the Nevada County Fairgrounds. Additionally, the Nevada County Veterinary Disaster Response Team has set up an evacuation center at the Fairgrounds for large and small animals.
Due to the large number of resources utilizing the fire camp, the Fairgrounds will be closed to walkers and bicyclists until further notice.
During the duration that the camp is set up, Gate 1 will be open to Fair employees and Fair business (those visiting the Fairgrounds’ administration office) only, Gate 4 will be open to campers, Gate 8 will be open for animal evacuation, and all other gates will be closed to the public and restricted to authorized fire personnel only.
These closures and restrictions do not affect the Main Office, which is open during its normal business hours of Monday through Friday from 8 am to 5 pm. Additionally, limited RV camping will be available by contacting the Main Office.
During this time, the Nevada County Fairgrounds is also being used as an evacuation center for small and large animals. The Fairgrounds are open and equipped to handle large and small animals brought to the Fairgrounds. Several animals are already on
the grounds, and the Fairgrounds will continue to receive and house animals as needed. Those with animals impacted by the fire, or those who need to remove animals to a safer location, are encouraged to use the Fairgrounds. If you need information or have questions regarding animal evacuations, contact Pat, Nevada County Veterinary Disaster Response Team (Animal Evac), at (530) 913-6506.

Evacuated horse, John, looks out over the fire camp from his stall at the Nevada County Fairgrounds. 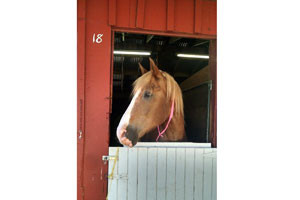 According to Mike Mohler, Public Information Officer with Cal Fire Incident Management Team 1, the fire camp, which was established on July 25, currently houses more than 700 individuals, as well as large equipment required to fight the fires.
—–