Nevada County Sheriff’s  received several calls from the public after posting a photo of a burglary suspect that was captured on a home surveillance camera. Sheriff Keith Royal says the home located in the 11-thousand block of Lake Wildwood Drive was broken into earlier this week.

The elderly owners of the home had passed away recently and the home was being taken care of by a family member.

The family had installed a video surveillance system to monitor the outside and the inside of the house, and deputies were able to review the video and a picture of the suspect was released to the public urging anyone with information to call the sheriff’s office. Royal says his office received a number of annonymous phone calls which identified the suspect at a Brett Bartlett, 54 years old of Penn Valley. The Deputies got a search warrant and went to Bartlett’s house.

Bartlett was booked into the Wayne Brown Correctional Facility Tuesday on a felony charge of second degree burglary. 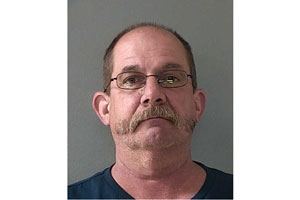