A male subject connected to a woman involved with a DUI hit and run collision on Wednesday was also arrested, not by the CHP, but Grass Valley Police. The driver from the hit and run, Lynita McCarthy, had driven the vehicle to a Segsworth Way apartment complex attempting to evade the driver of the vehicle she had rear-ended. According to Grass Valley Police Sgt Steve Johnson, witnesses observed McCarthy trip and fall while running into an apartment with her 18 month old child. Police and CHP were on site and forced entry into the apartment when the McCarthy would not open the door and they could hear crying coming from within the apartment.
Click here to listen to Sgt. Steve Johnson

Officers continued to search the apartment and located McCarthy and the child.
Click here to listen to Sgt. Steve Johnson 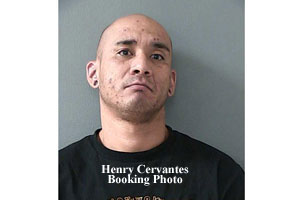 The CHP handled the arrest of McCarthy and Grass Valley Police took Henry Cervantes into custody for the warrant and possession of methamphetamine.