Early Monday morning a sheriffs deputy noticed a mini-van with a malfunctioning license plate light driving on Highway 20 between Poker Flat and Chance’s R Road. As the deputy pulled behind the vehicle it swerved several times crossing the center divide markings. According to Sheriff Keith Royal as the vehicle turned abruptly on to Poker Flat Rd the deputy initiated a traffic stop. The driver was identified a 27 year old Phelan Burns. Burns as driving in a suspended license and also on probation so the deputy asked Burns to step out of the vehicle and placed her in the patrol car.
Click here to listen to Sheriff Keith Royal

At that point in her story, Burns told the officer she thought she might have taken too much Dilaudin.
Click here to listen to Sheriff Keith Royal 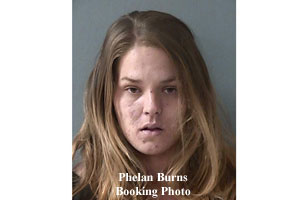 Burns also admitted to be in possession of Suboxone without a prescription. Phelan Burns was taken into custody for driving on a suspended license, possession of a controlled substance, possession of paraphernalia and booked into the Wayne Brown Correctional Facility.