A man ended up in jail after multiple calls and two contacts with the Nevada County Sheriff’s Office. On Monday evening, two calls came into the office that led to the dispatch of deputies to a Rattlesnake Road address. Lieutenant Bill Smethers says the calls came in about 45 minutes apart.
Click here to listen to Lt. Bill Smithers

Deputies responded to the residence and were able to mediate the situation. However, a little over an our later, another call came in of a physical altercation between a male and female in a van near the intersection of Dog Bar Rd and Wheeler Cross Rd. Deputies responded to the area but were unable to locate the van. The location was relatively close to where the earlier calls were reported so the officers did a welfare check returning to the Rattelesnake Road residence. Upon arrival they confirmed that the subjects from the van were also the subjects from the earlier confrontation and were given permission to enter. While interviewing the female the male called down to deputies from upstairs, and when being questioned backed away from the deputies and hid his hands behind his back., He eventually took a fighting stance while ripping his shirt off his back. The subject was given an order to show his hands.
Click here to listen to Lt. Bill Smethers 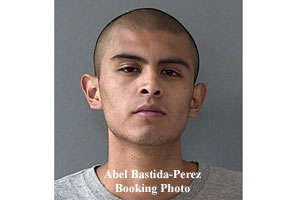 21 year-old Abel Bastida-Perez was transported to the Wayne Brown Correctional Facility and charged with possession of a controlled substance, resisting arrest, and brandishing a weapon at a peace officer.