A Grass Valley resident returned to her home and noticed something wasn’t right- and then was completely surprised by an intruder. Sgt Steve Johnson says the incident began on Thursday afternoon. An officer were dispatched to a residence in the 300 block of East Main Street around 2:30 PM. The victim, a 39 year old female, told the officer she had just returned from having lunch with a friend.
Click here to listen to Sgt. Steve Johnson 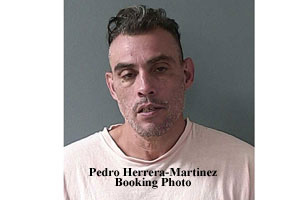 The startled woman asked the intruder who he was and he responded, “I’m Pedro,” and then he left through a sliding glass door. The woman called police and described Pedro as a Hispanic male with a unique mohawk style haircut. A search of the area did not locate the subject. Then on Monday an officer on patrol spotted a male matching the description.
Click here to listen to Sgt. Steve Johnson

Pedro Herrera-Ramirez was booked into the Wayne Brown Correctional Facility on first degree burglary charges. Bails is set at 50,000 dollars.