Nevada County Sheriff’s Deputies responded to a domestic disturbance last night where a wife reported her husband was shooting at her with a handgun.

Nevada county Sheriff’s Lt. Steve Tripp says the home was located just off Lime Kiln Rd. near Highway 49. When Deputies arrived they saw through the window a male sitting on the couch and a female hysterically crying, talking on the telephone.

The man rushed at the deputies with fists clenched.  At that point Tripp says the deputies deployed a taser and were able to get the man handcuffed and identified him as 55 year old James Curry. After a short investigation it was determined that Curry and the female were both highly intoxicated and that the handgun was accidentally discharged and almost struck the woman as she sat on the couch.

Curry was arrested for willfully discharging a firearm with gross negligence, a felony, and resisting or obstructing a public officer, a misdemeanor.
—- 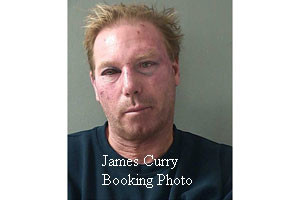