A Loomis man who had just been released from the Placer County jail was arrested later on the same day for assaulting a man in Penn Valley who had recently lived at his home, among other charges. Nevada County Sheriff Keith Royal says 46-year-old Todd Churchill drove up to a storage facililty in Penn Valley to retrieve his pickup….

Royal says there was a confrontation and Churchill struck the victim a number of times with a pool cue and crow bar. He says Churchill then took off on in the pickup and was stopped by Nevada County Sheriff’s deputies on Highway 49 between Grass Valley and Auburn…

Royal says the items belong to a home owned by a Placer County sheriff’s deputy, which was why Churchill had been in jail earlier that day. 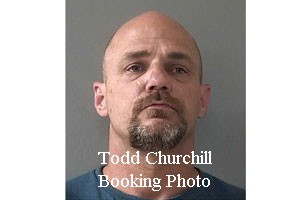