Yesterday morning the Nevada County narcotics task force executed a search warrant on two adjacent properties in the South County . One of them in the 15 thousand block of Metcalf Rd.  and the other in the 17 thousand block of Ephebe Lane. There was a 4,000 square foot house under construction at the Ephebe Lane parcel and some tents, a travel trailer and 6 large marijuana hoop houses on the other parcel. Nevada County Sheriffs Lt. Bill Smethers says they saw the marijuana grows during a fly over of the area, and when they went to the property they als found two females and 26 year old Brandon Columbus of Sebastapol.

The owner of the two properties was also from Sebastapol. Columbus said he comes up every two weeks to check on the house and marijuana. Lt. Smethers says there were no Medical Marijuana recommendations on site. At that point the task force began eradicating the 421 marijuana plants.

The women were determined not to be involved with the cultivation of the marijuana. Columbus was taken into custody and charged with illegal cultivation of marijuana. The task force attempted to contact the property owner by phone but he couldn’t be reached. Lt. Smethers says they will be seeking criminal charges against the property owner through the District Attorney’s Office.
— 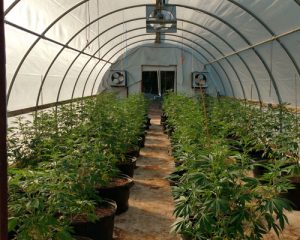 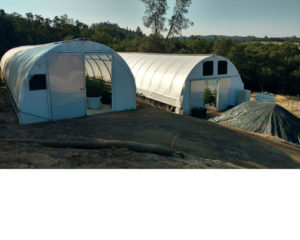