Marijuana Ordinance To Be On November Ballot 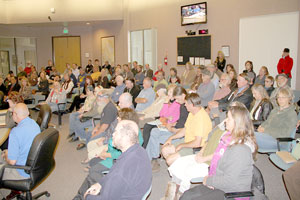 During public comment all but two or three of the more than 20 speakers wanted the board to adopt the new ordinance so it would be in place before this year’s growing season. Patricia Smith is the President of the Americans for Safe Access Nevada County Chapter

Under the new ordinance, each patient would be allowed 6 plants up to a maximum of 10 patients per Co-op, or 60 plants for a 30 acre plot. For medical marijuana, plants are grown for higher CBD   or medicinal content and less THC  , which is the hallucinogenic component. Patients told the board they are running out of the CBD rich marijuana in the county.  Don Besse , a local resident representing the International Faith Based Organizations said that the battle of greed  over medicinal need seems to be winning out.

The crowd wanted the Board to accept their ordinance now and put a moratorium on the current ordinance. During discussion Supervisor Scofield said from what he can see, that would be a counter productive move.

The cost to the county to have the ordinance on the November ballot will be $72,000 as opposed to $300,000 if a special election was called that did not coincide with the general election.   The Nevada County Board of Supervisors voted unanimously to let the people decide in  November.

"let the people decide"; like they did when accepting Sheriff Royal's ordinance?
No, it appeared to me 4 of the 5 supervisors were afraid; afraid of making a right decision in favor of the thousand(s) of patients, many of who are returning war veterans and in support of the many hopeful growers just starting their gardens!
What they didn't seem afraid of was spending another 10s of 1,000s of Nevada County residents $$$s! To date a number arguably exceeding $2,000,000.00!
From my perspective the BOS could have taken a brave and progressive stance towards helping many of their constituents who live in daily pain.