In a solemn ceremony in honor of our veterans on Memorial Day,  members of the American Legion held a ceremony at Pioneer Park in Nevada City with a traditional  laying of the wreath ceremony . Honor Guard Captain Les Hayes says the ceremony was to honor those men and women who have given their lives for our county.

The people attending showed respect when the honor guard was called to attention.

Another ceremony followed the one in Nevada city  at  Memorial Park in Grass Valley   , Former County Supervisor Bill Schultz, who is a thirty-one year veteran of the US Navy says a lot of people do not understand the need to have the Memorial Day ceremonies.

Close to three hundred people attended the ceremonies to honor those people who paid the ultimate price with their lives.  Speakers from the Blue Star Moms, World War Two veterans, Korea, Vietnam, Iraq and Afghanistan paid homage to those service members who have died.  First District Supervisor Nate Beason a retired   US Navy  Captain  was the keynote speaker saying   those who have served have a bond with the men and women who have fallen in defense of their country. *

Following the services at Memorial Park the Blue Star Mothers lead tours to commemorative plaques honoring veterans that are placed on various over crossings along roadways in the Grass Valley Nevada City area. 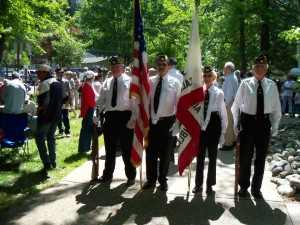 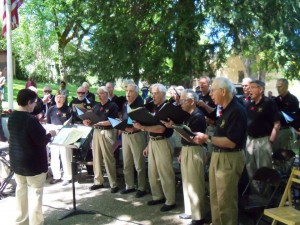