It was like a scene from a gladiator movie.

A fight involving two tenants at a Grass Valley apartment on West Main Street escalated into a modern day sword fight that led to the arrest of one male. Grass Valley Police responded to a call just atfer 1:00 PM  Friday of a fight in the area that involved a man with a chainsaw. Officers arrived and detained approximately seven individuals. Sgt Steve Johnson say that the fight began over a pending eviction of one of the tenants. There was a brief altercation that broke up quickly- but then one suspect returned. That subject was 50 year old John Munds.
Click here to listen to Sgt. Steve Johnson 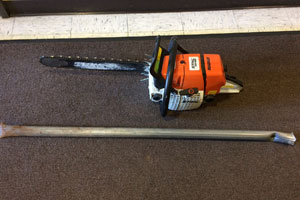 Johnson says it was fortunate neither of the males were injured during the incident.
Munds was taken into custody and booked into the Wayne Brown Correctional Facility for assault with a deadly weapon.