A gas station security camera and a witness led to the arrest of a would be motorcycle thief in an incident that occurred in Penn Valley. Yesterday morning (5/6) an employee at the Shell Gas Station on  Penn Valley Drive at Highway 20 reported that she observed a man pushing her motorcycle into a field near the business.  She yelled at the man to stop and he dropped the motorcycle and fled the scene on foot.  Marc Morrison was the CHP Officer taking the report.

The  surveillance video also showed a U-Haul truck parked near where the motorcycle had been taken. While returning to Grass Valley, Officer Morrison saw a U-Haul preparing to turn onto Rough and Ready Highway and immediately identified the passenger as the suspect from the motorcycle theft.

Bittney Springs Road was closed for a time.  The Suspect,  31-year-old Joshua Hardaway was  also found to have  an outstanding felony warrant for a prior vehicle theft conviction. The driver of the U-Haul said Hardaway was just helping him move.  He was determined to have no knowledge of the motorcycle theft and was released.     Hardaway  was booked into the Wayne Brown Correctional Facility for the theft of the motorcycle and the warrant. 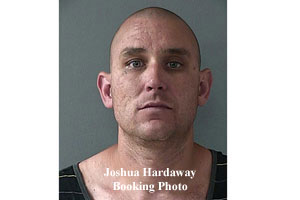