A motorcyclist in custody after a short attempt to outrun law enforcement Sunday afternoon. Nevada County Sheriff Keith Royal says one of his deputies saw an unlicensed motorcycle being ridden in the vicinity of Pittsburg Mine Rd and Gold Flat Road around 3:30 Sunday. As the deputy attempted to initiate a traffic stop the rider accelerated away. 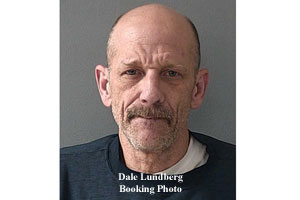 The rider eventually turns back onto Gold Flat Road, but the wet conditions are deemed unsafe by the deputy.

The deputy took Lundberg into custody for evading a peace officer and a number of driving violations. He then asked Lundberg if he had anything that could be dangerous to the officer.

The officer located one syringe on Lundberg’s person and a number of syringes and an amount of methamphetamine in his backpack.

Lundberg was arrested for numerous driving violations, possession of a controlled substance, possession of paraphernalia, and committing a crime while on felony probation.