Nevada County Sheriff’s officersand the Grass Valley Police collaborated on the arrest of suspects involved in a potential kidnapping and assault case Thursday evening. The series of events came together around 7:30 PM when a 911 call from the 76 station on Pleasant Valley Rd in Penn Valley was received.
Click here to listen to Sheriff Keith Roya

Sheriff Keith Royal said one victim attempted to run when he spotted sheriff’s officers arrive at the 76 station but was apprehended quickly as a result of broken ribs apparently received during the assault. While questioning the victims, officers were able to piece together a story that had begun when the victims tried to hold collateral from the suspect who allegedly owed them money.
Click here to listen to Sheriff Keith Royal 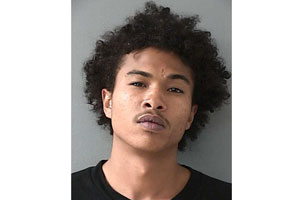 The victims and suspect agreed to meet at the Radio Shack parking lot in the Brunswick Basin in Grass Valley. The suspect, Marques Garland, did not come to the meeting alone and things quickly got out of hand.
Click here to listen to Sheriff Keith Royal

The Sheriff says  they eventually ended up in Penn Valley.
Click here to listen to Sheriff Keith Royal

Nevada County Sheriff and GVPD worked together on the investigation and Grass Valley Police Chief John Foster says ultimately Garland was arrested as well as his 16 year old cousin.

Three other suspects are also being sought in regards to the incidents.

How many times is this guy going to be arrested before he's finally held accountable? You'd think this one would stick! Come on D.A. - do your job.