A suspect arrested yesterday morning in connection with a marijuana grow on US Forest Service Lands at the end of Lower Greenhorn Road has been involved with other illegal grows over the years. Sheriff Keith Royal says In 2009 suspect Robert Furnas had a similar garden in the same area that landed him in trouble.*
Click here to listen to Sheriff Keith Royal

The Sheriff’s Office   recently received notice that another marijuana garden was growing on the same US Forest Service property and the sheriff’s officers and forest service agents made a visit there yesterday morning.
Click here to listen to Sheriff Keith Royal 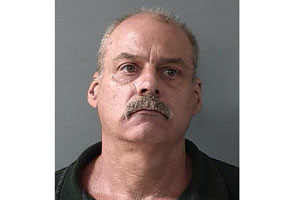 In addition to the recent arrest and the 2009 incident,  Mr. Furnas was arrested in October 2012 for another marijuna related violation when he was caught by sheriff’s officers while trimming buds sitting naked on a picnic table in a marijuana garden on the back of a person’s Wolf Mountain property that had reported a squatter. Furnas was arrested for the garden and utility theft for diverting water for his garden at hat time.

Furnas was booked into the wayne Brown Correctional Facility for the recent grow as well as for a warrant related to the previous activity.