NCC Board Member Keith Grueneberg Served with Intent to Recall

Nevada County Consolidated Fire District (NCCFD) Board  member Keith Grueneberg  has been  served with a notice of intent to circulate a   petition to recall and remove him from office . 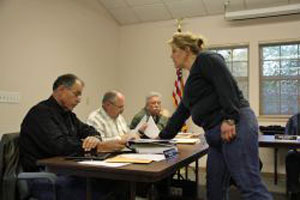 The  notice claims Grueneberg  did not adhere to the intent of the use of funds from the 2012 Tax Measure when he negotiated to give back an un-budgeted amount of approximately  $20,000 worth of concessions to the firefighters.

When contacted this morning for comment Grueneberg says he was not acting alone.

The notice claims as lead negotiator, Grueneberg also negotiated the new firefighter’s union contract to give a significant increase to salaries and benefits of   $81,000-$100,000.    Grueneberg says the contract is not final.

A third allegation in the notice says that Grueneberg   violated the District’s Discrimination and Harassment Policy,   when  he circulated a video with racial overtones by email to the Firefighter’s Union President, who then forwarded it to other members of the District. The notice says the  email was disparaging and derogatory as well as insulting to the administrative staff it was directed toward.

Lastly, the notice says  Grueneberg has an aversion to keeping the public informed of Board decisions and actions , a violation of state transparency laws.

A timeline for a recall special election indicates the  district would have to pay for a special, probably all mail ballot, election. The cost for this election could easily run up to $50,000.
LaBarbera  says she plans to file the  notice of intent to circulate a   petition to recall Grueneberg   with the elections office today.