Filmmaker and Historian Bill George will be showing his most recent production “Chinese Builders of Gold Mountain” at the Nevada County Historical Society Speaker Night presentation Thursday night Jan. 21st.  The Chinese built wondrous works that created modern California. The documentary film will take you to the stupendous railroad the Chinese built through the solid granite of the Sierra Nevada and to the Gold Country where Chinese miners struck out to find their fortunes, and many of them did.

George says people will also learn the locations of the Chinese temples in California that people can visit. The Nevada County Speaker Night presentiation is at the Madelyn Helling Library Community room Thursday January 21st at 7pm, the event is free and open to the public. Come early for a good seat. They’ve been having standing room only crowds.
— 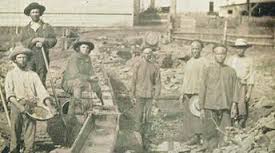