NCPD Arrest One For Drugs and Burglary

An arrest for drugs and stolen property in Nevada City. Yesterday around 4pm, Nevada City Police Officers responded to a call for service at SPD Market on Zion Street regarding a suspicious male subject who was inside the bathroom yelling for over 30 minutes.  Officers contacted an employee of the market who indicated the subject had just left the store and was seen walking toward Argall Way. Nevada City Police Officer Scott Goin says officers contacted 20 year-old Brendan Smith, who is a transient from Grass Valley, in the 100 block of Argall Way.
Click here to listen to Officer Scott Goin 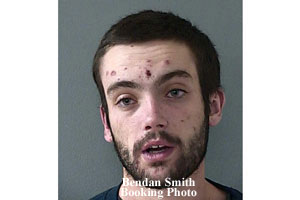 Officers arrested Smith for being under the influence, and searched him.  They found several prescription narcotics which were not his, along with a hypodermic needle. Officers then made an additional discovery.
Click here to listen to Officer Scott Goin

Estimated value of the gold is in excess of a thousand dollars. Nevada City Officers worked with Nevada County Sheriffs Deputies and determined the gold items of jewelry had been stolen from a residence in the County, during a residential burglary. Smith was taken to the Nevada County Jail for being under the influence of a controlled substance, possession of a controlled substance, possession of drug paraphernalia, along with possession of stolen property. A charge of residential burglary was added during booking.