He’s charming he’s friendly and he certainly knows how to work a crowd.   That would be  Rudiger, Nevada City’s new canine police officer.
The 18 month old black sable German Shepard was officially sworn in at last nights city council meeting to a packed crowd of well wishers and fellow officers from surrounding police departments. Rudiger, who was born in the  Czech Republic was purchased with funds from the Sean M. Welch Foundation,  and donations from several community members will pay for his upkeep and care. Police Chief Tim Foley says no city funds were used.

Founder and president of the  Sean M. Walsh Foundation,   Cheryl Walsh says she  started the foundation in honor of her son who was killed while serving in the military, and had wanted to be a canine officer some day.  She says Rudiger is the 11th police dog the Foundation has funded.

Rudiger also has a new specially outfitted canine officer patrol car and will be paroling Nevada City with his handler,  Officer Scott Goin. Besides getting his new collar and badge last evening, the city also presented Rudiger with a t-bone steak. 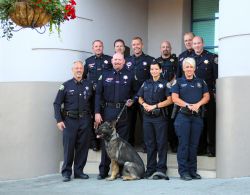