A Nevada City man being admitted into the hospital in Truckee identified himself as a thief and a counterfeiter so hospital personnel contacted the Truckee Police Department and the man ended up going to jail. Truckee Police Sgt. Ted Bier, says the ER staff at the hospital called police about the suspect, David Riley. When police responded to the hospital and ran his name several warrants for his arrest showed up. Police then took a look at his motorcycle.
Click here to listen to Sgt. Ted Bier

A closer inspection of the license plate uncovered another crime.
Click here to listen to Sgt. Ted Bier

Then while impounding the motorcycle officers looked inside the bag that was attached to the motorcycle and yet another crime was discovered.
Click here to listen to Sgt. Ted Bier 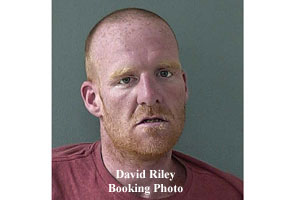