Nevada City Police have arrested a suspect who was found in a stolen car belonging to a person reported missing out of Placerville in El Dorado County and with suspected stolen items also found in the vehicle. Nevada City Police Chief Tim Foley says Bradford Conrad LaSalle ,32 years old from Fair Oaks, California was contacted behind the Nevada City Veterans Hall last Friday.
Click to listen to Chief Foley

Officers Shayne McLaughlin and Shane Fransen responded to the location and made contact with the driver, 32 year old Bradford LaSalle. A 25 year old Jeriann Ballantine was in the passenger seat.

The officers then ran warrant checks and found Jerriann Ballantine had two warrants for her arrest out of Sacramento. And at that point LaSalle decided to bail out of the vehicle and run.

After a two to three block foot pursuit officers were able to stop LaSalle as he was attempting to bury about a quarter ounce of methamphetamine in the dirt. Officer McLaughlin received a broken thumb in the scuffle as LaSalle was taken into custody. The vehicle was determined to belong to a Danny Colin Mitchell who resides in the Placerville area and has been reported as a missing person. Inside the vehicle officers also found several pieces of property.  Some of it is confirmed stolen in  El Dorado County. LaSalle is being held on $300 thousand dollars bail.  Jerrianne Ballantine was released to Sacramento County on her outstanding warrants. 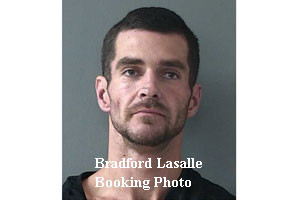