The 2nd annual Nevada City Soap Box Derby Saturday drew an estimated  crowd of just under 5,000 spectators and  is on track to raise    $15,000 for Nevada City’s Pioneer Park.   Event organizer Rich Bodine says 42 cars were entered this year and  they  were judged on speed and creativity.
Click to hear Rich Bodine 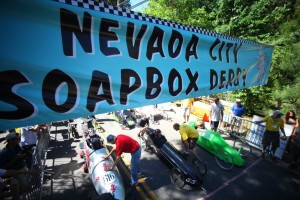 In the Art category, Ensemble Design’s flame throwing Team Two-Two was voted most creative, followed by Gary Apple’s big man-eating fish, the Gravity Grouper that emitted bubbles,  and third in the art category was a Red Barron Airplane style box car by Experienced Aviation Aces.
click to hear Rich Bodine
There was one crash early on in the races and a volunteer 35 year old Justin Thacker received a head injury. He was taken to Sutter Roseville  by air ambulance, and was released later that day . The race was delayed for 90 minutes when racers decided to continue but with 2 cars instead of 3 in each heat to give them more room.  The coarse was narrowed this year to allow more spectator space. Bodine wants to give a big thanks to all the volunteers, those who entered cars and to sponsors including AJA video Systems  for stepping up to help put on the event.  Money raised will go to improvements at Pioneer park. Last year the  funds raised were used to build a bocce ball court.