The Tri Counties Bank in Nevada City was robbed this afternoon shortly after 1:30 p.m. The bank robbery lauched a multi-agency search for the suspects. 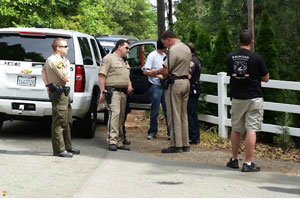 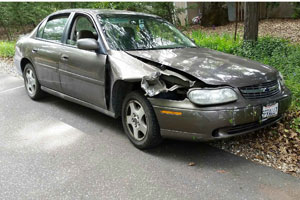 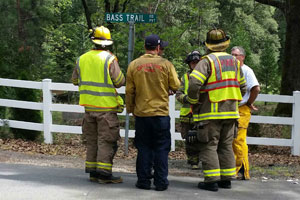 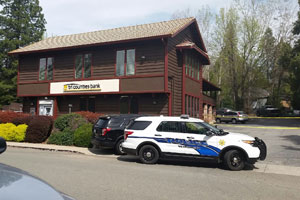 The suspect vehicle, an early model Chevy Malibu, tan in color was spotted heading up Brunswick Road and the CHP and Grass Valley police were in pursuit. Grass Valley Police Lt. Alex Gammelgard says the pursuit ended when the Chevy Malibu crashed into a gate in a driveway.

One male subject in the car was injured and was taken into custody, but the other person who was believed to be driving the car fled from the scene on foot.

At the Tri Counties Bank in Nevada City police tape circles the drivway and the bank is closed to customers. No employees in the bank were injured and they have been giving detailed descriptions to police.
A CHP helicopter was called in to assist in the search for the suspect at large in the Area of Burma Road and Bass Trail Rd.
in Cedar Ridge.  As of 3 pm Monday Afternoon, the search is continuing for that suspect.