At its organizational meeting on January 11, 2017, the Nevada County Republican Party elected its leadership team for the 2017-19 term. Elected as the new chairman of the Republican Party is Bob Hren. Bob is educated as an engineer and attorney, and worked 40 years in the energy sector, retiring as a vice president of an international engineering-construction company.  He has resided in Nevada County since 1999.

Also elected to new two-year terms are 1st Vice Chairman Greg Marks of Nevada City, 2nd Vice Chairwoman Nancy Brost of Nevada City, Secretary Claudia Taylor from Lake of the Pines, and Treasurer Fran Freedle from South County. Deborah Wilder, who has skillfully guided the Party as Chairwoman for the past four years, remains on the Executive Board.

Bob outlined key objectives for the Nevada County Republican Party over the next two years which include aggressive voter registration initiatives, and expanding outreach to Nevada County businesses, elected officials, and voters. 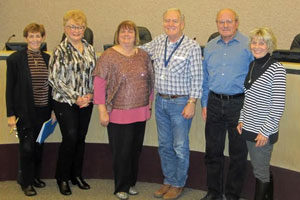 For more information on the Nevada County Republican Party, please visit the website at www.nevadacountygop.org.