One of the bearers of the Local Nisenan History has passed away.  Everette Smith died Tuesday, he was 85.    Tribal elders dubbed him “Weary” and that’s what he was called by most people.  Weary  was a veteran of the Korean War and  world War II, where he served as a glider pilot in the Pacific. 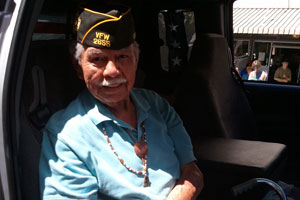 Family member Shelly Covert, who is secretary to the Nevada City Rancheria Tribal Council says Weary was a prominent elder in the Nisenan tribe and she had been working with him to keep the  history alive .

Nevada County Historical Society board member  Wally Hagaman also remembers Weary as humble and soft spoken but extremely generous with his knowledge of the history of the tribe.
He says Weary  was able to identify    Nisenan artifacts housed in the Firehouse No. 1 Museum in Nevada City which were believed to be tomahawk heads.

click to hear Wally Hagaman
Everett Weary Smith will be buried at the Keystone Indian Cemetery outside of Dobbins in a private ceremony.

I would have loved to see his daughters, two of his dearest things in life Abby and Becky Smith, as well as his son Roger Smith, mentioned in this article.He passed so much of his wisdom down through them as well as his many grandchildren...His daughters both still to this day pass down his wisdom of their heritage in his great grandchildren even in his passing, and I for one am extremely grateful for it. Miss you all the time and I am grateful I can visit your place of rest quite often, even though it's not the same as talking to you with your amazing humor and wisdom grandpa. Mila baby and I will be putting flowers on your grave this fathers day with Aunty Becky, miss and Momma Abby ( hopefully my beautiful cousin Ashlee as well) <3