A male subject well known to Grass Valley law enforcement couldn’t control himself and eventually threatened police officers as he was taken into custody. According to Grass Valley Police Sgt Jason Perry, the subject 25 year old Jerry Delgado, had been harassing occupants at a Kathleen Way residence around 4:00 AM.
Click here to listen to Sgt Jason Perry 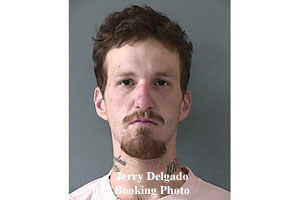 Upon speaking with the original complainants it was determined that Delgadao had been inside the residence disrupting several people and then moved to the driveway and continued his disruptive behavior. As officers detained Delgado he became aggressive.
Click here to listen to Sgt Jason Perry

Delgado was booked into the Wayne Brown Correctional Facility for a probation violation, disturbing the peace, and threatening an officer while resisting arrest.