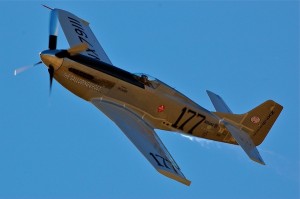 The National Transportation Safety Board Tuesday provided an update on the agency’s investigation into last years crash of a highly modified p51D “Mustang” airplane at the National Championship Air races in Reno Nevada.  On September 16th the pilot of the Galloping Ghost, 74 year old Jimmy Leeward experienced an upset while turning between pylons on the race course. The airplane crashed on the ramp in the box seat spectator area. Leeward and 10 spectators were killed and more than 60 others were injured. In addition to the investigative update, NTSB Chairman Deborah Hersman announced that the Agency was issuing a total of seven safety recommendations to make the National Championship Air Races a safer event for pilots and spectators alike. Chairman Hersman says “We are not here to put a stop to air racing, We are here to make it safer.” Nevada County Airfest Director Tim O’Brien who is also a credentialed photographer for the National Air Races in Reno says the planes that are raced in the show are highly modified aircraft.
04-11Tim O’Brien Reno Airshow
The safety recommendations address race course design and layout, pre-race technical inspections, aircraft modification and airworthiness, as well as FAA guidance on air racing, the effects of g-forces on pilots and ramp safety issues. The Reno Air Racing Association is planning a tribute to the victims of last years crash as part of the Air races scheduled September 12-16 of this year.