The Nevada Union High School Debate Team is hoping the community will come out and support them as they present  “Miner Disputes, a civil discourse on Current issues,” a fundraiser for the Nevada Union Debate Team.  NU Debate Coach Michael Anderson says student advocates will present arguments for and against a number of topics.

The event is this Wednesday evening April 26th …Student advocates will present arguments for and against and the audience will have an opportunity for cross examination. .They will also be showing video examples of high school policy debate.

Debate team member Morgan Margulies says he got interested in Debate when he was in middle school.

Devin Anderson, another debate team member says for a small school, they have been fairly successful.
click to listen to Devin Anderson

The fundraiser is Wednesday evening, April 26th from 6:30 to 9 pm at Summer Thyme’s , 213 Colfax Avenue in Grass Valley.  They will have tasty appetizers and desserts, a no host bar and silent auction.   Tickets are $20 available at the door or at www.nudebate.org. 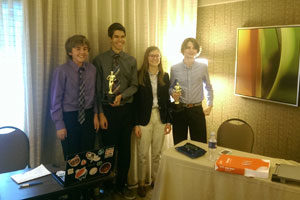 Devin and Jenna with Trophies 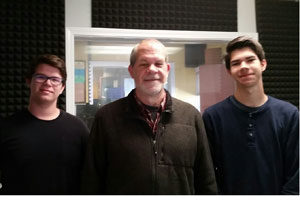