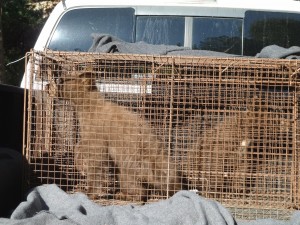 Two orphaned black bear cubs were captured in a Nevada City neighborhood by Department of Fish and Game bear specialists and transported to the Lake Tahoe Wildlife Care facility in South Lake Tahoe on Friday.

The 5-month old cubs will share space there with five other rescued cubs (including the two North San Juan cubs rescued last month). LTWC, a nonprofit organization, plans to rehabilitate the cubs and then release them in the spring within 75 miles of their original home.

Sunrock Road in Nevada City is frequented by bears that enjoy the rural wooded ridge with easy access to the river.

“We know bears are around,” said Jean Gilbert, a Sunrock resident for 10 years. “They come at night and drink out of our pool. Most of us have learned how to avoid contact and keep from attracting them to our residences.”

But one neighbor, says Gilbert, keeps chickens in an unsecure coop and that has brought several bears to their yard.

“They shot and killed two adult bears a few weeks ago for raiding the coop, and now we suspect they killed the mother of these two cubs.”

The mother bear’s body was found and DFG has opened an investigation into her death.

Once it was determined that the cubs were orphaned, Fish and Game wildlife biologist Mark Kenyon brought a team of four to Nevada City to capture the cubs.

The first attempt failed. The cubs would not enter the traps despite the lure of enticing bait.

“Bears can’t resist Vienna sausages,” he said with a smile.

After several hours, the cubs ran up a big oak tree in Gilbert’s backyard. They climbed high and so far out onto slim branches that the DFG team couldn’t reach them safely. After 5 hours, Kenyon called off the rescue attempt.

He brought two “Have a Heart” cages with pressure-activated closures to Gilbert’s yard and baited them with fresh nectarines and peaches. Thursday night both hungry cubs succumbed to the temptation and were captured. Friday morning LTWC volunteers transported them to the rehab facility.

“A lot of people came together to save these little bears,” said Sylvia Jensen, a Sunrock neighbor. “Ralph and Lisa Cutter worked with DFG, Jean and I to rescue the cubs. Ann Bryant of The Bear League helped us keep them safe in the interim.”

The Sunrock cubs are currently in isolation in the rehab facility while they’re being treated for ticks. Soon they will join the other cubs in the main bear enclosure.

“This is the best possible outcome, given the circumstances,” said Gilbert. “It’s important to make your yard ‘bear-proof’ by taking in bird feeders and removing all food resources. If you keep chickens, please use an electric fence or secure coop. There is no need to kill these magnificent bears that live among us.”

Jean Gilbert is operations manager at Bear Yuba Land Trust and submitted this article to KNCO.