Certificate of Recognition for Jessica Hudson:

The Nevada County Board of Supervisors takes great pleasure in recognizing Jessica Hudson for her outstanding service as Nevada County Librarian from December 2011 until March 2014.

Under Jessica’s leadership, the Nevada County Library system has undergone an extraordinary transformation. Library hours have been expanded at the Helling, Truckee and Penn Valley locations. The Library has augmented its purchase of downloadable materials, including the new DK Travel eBook database; resulting in checkouts increasing by 29% over the previous year to more than 1,000 checkouts per month. Overall, programs and events at the Library have expanded dramatically. Almost every day of the week features some kind of program at one of the circulating libraries; either for children, teens or adults. These include Mother Goose and Preschool Storytimes featuring books, puppets, and flannel board tales; PAWS to Read, Family Sing-a-long, LEGO in the Library for children and teens at the Helling Library, and a Teen Advisory Group in the Grass Valley and Helling Libraries. There is also a summer reading program with performances at the Grass Valley, Nevada City, and Truckee libraries.

In 2013 Jessica and her staff collaborated with the Information and General Services Department to establish a new Collaborative Technology Center (CTC) at the Madelyn Helling Library. Utilizing no County General fund dollars, this entirely grant-funded project added 2,000 square feet of space which can be used by up to 70 people at one time. The Center houses 15 PCs, five iMacs, 20 Dell notebooks, 25 iPads, five Nook Colors, five Kindle Fires, five Samsung Galaxy Tab 2s, class sets of videography equipment, two Skype-enabled collaborative use rooms, and a 3-D printer. Computer, workforce development and recreational technology classes are held in the instructional areas of the CTC. In less than a year the CTC has become a hub of activity and now offers over 30 monthly technology classes. Patronage at the Helling Library has increased by 15%. Guided by Jessica’s vision to expand library services in the rural communities, in 2013 the Library obtained a grant to place a library lending kiosk in the North San Juan area. Jessica has also supported the Penn Valley Community Foundation in its fundraising efforts to build a Community Center, which could include a new and expanded library station for Penn Valley.

It is for all these reasons that the Nevada County Board of Supervisors wishes to recognize with distinction Ms. Jessica Hudson for her integrity, leadership, commitment and contributions to the citizens of Nevada County and wishes her well in all her future endeavors. 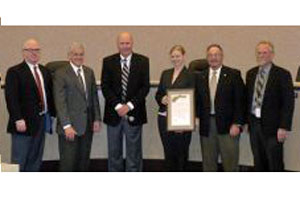