Parolee Arrested for Firing Shots in Rough and Ready

Some residents of Rough and Ready called the Sheriff’s Office Tuesday after they heard someone randomly shooting in the area. Sheriff Keith Royal says the call came in Tuesday shortly after midnight.

The reporting party said that a Richard Altman, age 54, who  lived nearby was the one that had been shooting off the rifle.

Deputies found Altman living in an RV behind a house on the property and searched his residence. They found a sawed off shotgun tucked between his bed matresses and there were several boxes of ammunitiion and expended rounds in the RV.

Eight Felony charges in all and Alton will also face charges for Failure to Appear on prior misdemeanor charges. Bail was set at $50,000. 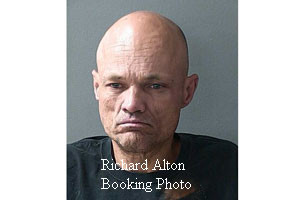 Glad he got swept up. Pain in the neighborhood!