The deputy  made contact with Noriega in the driveway and began a search. Inside Noriega’s front jacket pocket he found a pair of brass knuckles and  $3,700 in cash. The deputy  then searched the vehicle and found 69 grams of marijuana in a plastic bag.

click to listen to Lt. Bill Smethers
Inside the bag was a digital gram scale, approximately 26 grams of suspected methamphetamine, and another 8.25 grams of heroin. The deputy detained Noriega in the back of the patrol car and contacted the residents of the house. They said they did not recognize Noriega and had no idea why he would be at their house. Noriega was charged with five felony counts related to possession and transport of controlled  substances for sale, possession of an illegal weapon for the brass knuckles and a no bail warrant out of Sacramento County.
– 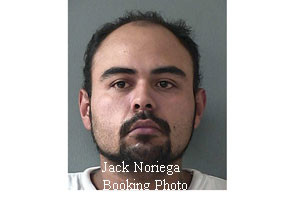