A structure fire on Pasquale Rd a short distance off  Red Dog Rd on Banner Mountain had residents concerned as a number of fire engines sped to the scene.
Shortly after 3:00 this afternoon multiple agencies and fire resources responded to structure fire at 12701 Pasquale Road…Nevada County Consolidated  Fire Prevention Officer Terry McMahan says 6 engines and 3 water tenders from Nevada City, Nevada County Consolidated, and CalFire responded to the call that came in at 3:09 pm.
Click here to listen to Fire Prevention Officer Terry McMahan

Home owner Tamara Zieman says she had been out on some errands and returned home to see smoke coming out of the house above the garage. She opened the garage door and saw a small fire.
Click here to listen to Tamara Zieman

The fire had taken out her home telephone connection but she was able to call 911 on her cell phone.  Here teenage daughter was home alone and she did not have a cell phone, Tamara says it was good she came home when she did.

The cause of the fire remains under investigation. 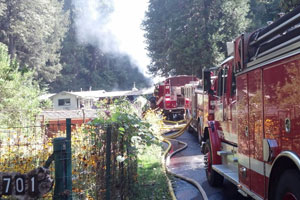 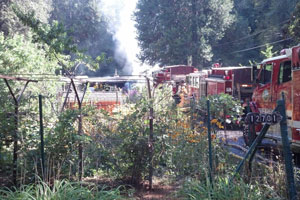 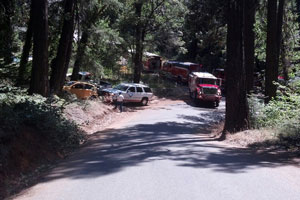